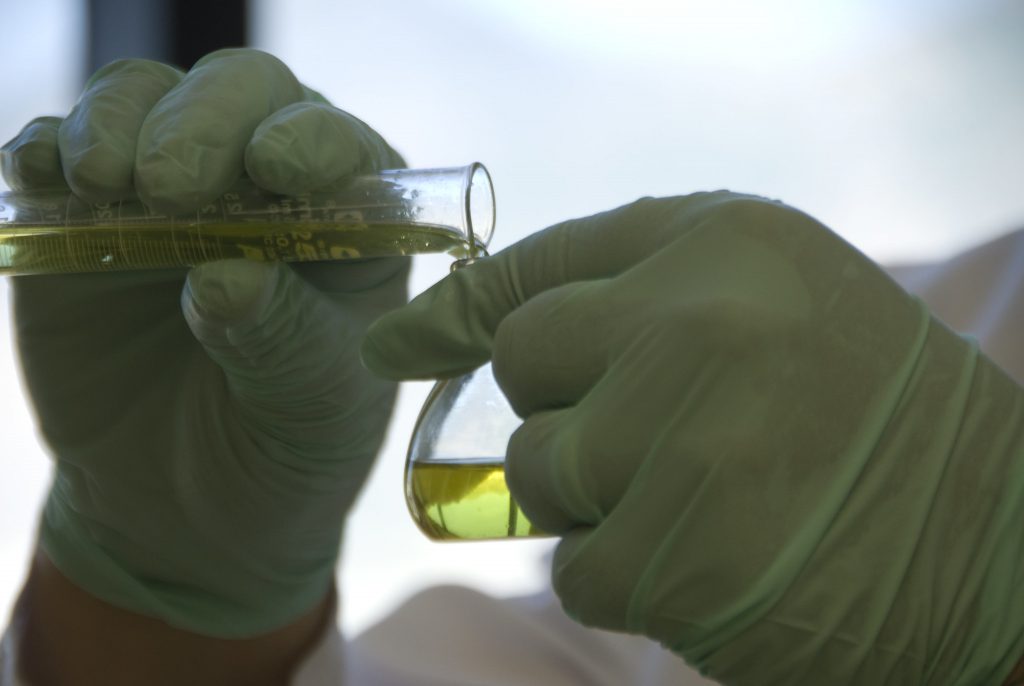 Why is Young Living the number-one choice for essential oils in the world? It’s because here you will find the purest, highest-quality essential oils. Where do quality and purity start? Do they start with the broker? With the vendor? With the marketing? With the salespeople? With the lab and chemists? What determines a genuine, pure, therapeutic-grade essential oil? I talked about this here and here, but really, there’s more to it than that:

In 1878 the perfume industry first started synthesizing compounds and realized that they could start duplicating compounds, like phenol, found in many essential oils. Today, more than 145 years later, they can duplicate every molecule in every essential oil that they can identify, although we do have compounds that have not yet been identified.

So they’ll take substandard oils into a lab and manipulate them with synthetics. This is called “adulteration.” There is probably more adulteration in the essential oil and aromatherapy industry today than there is in any other industry. Adulteration is the practice of diluting pure, therapeutic-grade essential oils and other nutritional products with less-expensive, usually synthetic versions that decrease the effectiveness of those products.

It’s rampant because there was—and still is—no industry-wide regulation of or standards set for the essential oil industry in terms of what they put into their products. Some standards for constituent levels have been set by the International Organization for Standardization (ISO) and the Association FranÇaise de Normalisation (AFNOR), but not all constituents have been discovered yet, hundreds of oils still lack international standards, and there is no international law that all essential oil manufacturers have to obey. Thus, there is no guarantee that when someone buys a bottle of essential oil that they are getting a bottle full of only the purest, most potent essential oil money can buy—unless they buy from Young Living.

I tried to establish those standards. Let me tell you about some common adulterating agents to watch for in the essential oils you buy and how and why to watch for them.

Toward the Establishment of Standards: The D. Gary Young Research Institute

In 2001 I gave an hour-and-a-half-long presentation to representatives of several health food companies to create a facility to research products so that we could standardize labels. Boy, what a brilliant brainchild that was. Thirteen people came to the conference table, and three called in on a conference call. We, as health food people, are called “alternative,” but who’s really alternative? What the alternative people do, though, is spend too much time slamming and bad-mouthing each other.

Case in point: After I made my presentation, the regional representative from DSA (Direct Selling Association) stood up and gave a half-hour presentation in which she said, “Come on, let’s get behind Dr. Young. This is the greatest opportunity we could ever have.”

Then a lady from another company said, “I’m not going to have my product analyzed in a laboratory.”

I said, “Why not? What are you afraid of? You have one product at the moment, and I have over 200; and I’ll put every one of them on the line because if I’m selling a product that doesn’t work, I want to know because I won’t waste my time selling it.”

Two people in that audience stood up and said, “Dr. Young, this is a marvelous idea. We’re going back to our companies to report, and we are going to encourage them to join with you and form this research clinic.” I never heard from either of them again.

So I spent four years developing, building, and planning, and now we have our own research center. We’re doing it. We’re documenting everything—what works or doesn’t work—everything. I can tell you that I haven’t seen a single essential oil fail in a single case yet.

That research center was eventually named the D. Gary Young Research Institute, and one of the things the Institute’s scientists analyze is the purity of the oils Young Living provides. They’re continually on the watch for these common adulterating agents.

As members, you’ve probably had people come to you saying, “Oh my goodness, I can get oils a lot cheaper, and they’re still pure.”

To that, you can say, “Hey, you’re right. Let me smell it. I love smelling your pure oil.” Take a good sniff from both barrels, and hand it back to them and say, “You’re absolutely right. I’ll certify it as pure crap.”

Because of the very real possibility of essential oil adulteration, I built a team of people around me of some of the best experts in the world. It’s these people who are in the Institute.

My Studies in Analytical Chemistry

Where did I get my knowledge to know how to do this? I spent a lot of years studying analytical chemistry. I started studying in 1994 with the Albert Vieille Laboratory in Grasse, France, where I took my first class in analytical chemistry. Then I went to Lyon, France, and studied with Dr. Hervé Casabianca. He has spoken from our convention stage. Four times he has been in my laboratory to do training, and he has done training in Ecuador as well. I have traveled to France and studied with him five or six times over the years, continually updating my understanding. I have taken three of my technicians to France to train and study with him as well. This is something I take very seriously.

The other expert I studied with was essential oil expert and author Dr. K. Hüsnü Can Baser, professor at Anadolu University in Eskisehir, Turkey. I went there and took 121 class hours in Gas Chromatography-Mass Spectrometry analysis and in understanding essential oils.

Gary and Dr. Husnu Can Baser

I also have Dr. Mike Buch, Dr. Richard Carlson, and other scientists working in the laboratory to understand and determine the right percentages of compounds that should be present.

I work with seven other laboratories around the world in identifying compounds. When we have a question or a suspicion that something is not right, we send it to the other labs and ask them to break it down.

Also, I co-authored a study published in the Journal of Environmental Analytical Chemistry in 2015 that documented the adulteration of several high-value and bestselling oils.

How Do You Know if an Oil is Adulterated?

Rose oil (Rosa damascena) is an expensive oil. University scientists from Italy analyzed 19 commercial samples of rose oil and found that most of them had been adulterated with Palmarosa (Cymbopogon martinii) oil.

Sandalwood is also adulterated a lot because of shortages related to sustainability issues. It’s supposed to have 90 percent total santalol content, by AFNOR standards. But in 2004 scientists found that all the samples they tested of commercially available oils failed those standards.

The question is: How are you, the Young Living member or buyer of essential oils, going to know if an essential oil is adulterated? This isn’t something usually listed on the label. That’s why Young Living does the research for you and maintains high non-negotiable benchmarks of our own through our Seed to Seal standards. These standards involve rigorous testing.

Why Should You Avoid Adulterated Products?

As I said here, they are less effective. They may still smell nice, but they won’t have the same therapeutic effects.

How Do You Avoid Adulterated Products?

Because adulteration isn’t something that’s declared on any essential oil label, avoiding it is a matter of knowing where your oils come from and how they’re tested. Because Young Living oils come either from its corporate-owned farms, where quality and purity is controlled from “Seed to Seal”—or from the planting of the botanicals from which they’re derived to bottling—from its partner farms or certified suppliers, which are held to the same high standard, the oils are guaranteed to be 100 percent pure, therapeutic grade.

More than that, though, the D. Gary Young Research Institute’s scientists rigorously run all of the oils through many tests like Gas Chromatography/Mass Spectrometry and Isotope-Ratio Mass Spectrometry, which detects any adulterants. Visitors to the Institute’s lab at the Young Living Global Headquarters in Lehi, Utah, can watch the tests being run.

THE BOTTOM LINE: ADULTERATION WILL INCREASE, SO BE INFORMED

Each year the adulteration will get greater, and more and more people will try to promote their adulterated products. They’ll even go so far as to tell you that the synthetic essential oils are better because they’re more uniform and consistent. We will hear this. We will see it publicized. We will see articles in magazines and newspapers trying to convince the public that synthetic essential oils are equal or better because they’re consistent in their chemistry. These are the fraudulent things that will come. Just know that that’s what will come in the future. To avoid it, buy Young Living essential oils.