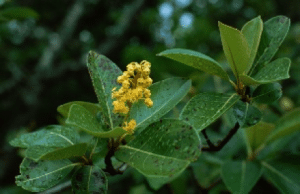 Byrsonima crassifolia is commonly known today as nance or nanche. This tree was called chi by the Mayan people. In the book Medical Ethnobiology of the Highland Maya of Chiapas, Mexico, the authors write that the Mayan term for this tree was borrowed by the Spanish as they began to understand its value.
The most important and common use of the bark of this tree was for treatment of diarrhea. Several pieces of the nance bark would be boiled in water to be prepared as tea. The book authors state that the bark tea has a mild antimicrobial activity against Staphylococcus aureus.
The locust tree was also used in healing rituals for: