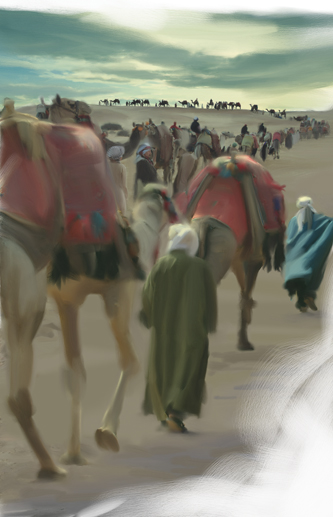 We continue with a series of excerpts from D. Gary Young’s novel The One Gift, the action-filled story of a Bedouin caravan commander named Shutran. We hear the Christmas story told by Shutran’s descendant, also named Shutran, as he meets three caravan commanders who will carry royal gifts to a Special Child.

When I went outside to refuel the firebox, I noticed some movement along the shoreline. The moon, reflecting off the water, illuminated the caravan that would soon be here. We didn’t have to wait long for them to arrive. Most of the caravan had probably stopped in Heshbon, as only the commander and his guards came to the palace. In a very quiet voice, but one of strength and conviction, he said, “I am Caspar. Is this the Palace Treasury House of Ein Gedi?”

“Yes, it is, Commander. Welcome, I have been expecting you! Come inside and sit down and eat a little. My servants will attend to your camels and packs.”

“Thank you. I will tell my guards to give your servants the packs that I have brought.”

“How is it that you come here?” I inquired.

“For many years as I traveled with my caravan across the Silk Road to Nineveh and Damascus, I heard the stories that were told around the campfires and talked about in the marketplaces of a great event that would come to pass in our time.

“When I returned to my country, I told my people and our king what I had learned. They laughed at me and said I had been in the desert sun too long, but I believed it to be true. The storytellers always told us to watch for the signs in the heavens.

“Eight months ago I began watching three stars that seemed to be moving together. Every night there was more change than the night before. After 21 days they were in perfect alignment with what appeared to me to be an illumination that was growing brighter. I knew this was one of the signs of which they had spoken. For this reason I have come. I know that I am to help fulfill a prophecy told long ago. According to the legend, two others will come with gifts. I am certain they also will have seen the same stars.”

The One Gift novel is available at Life Science Publishing by calling 800-336-6308 or at www.lifesciencepublishers.com. Copyright © 2010 YL Wisdom.