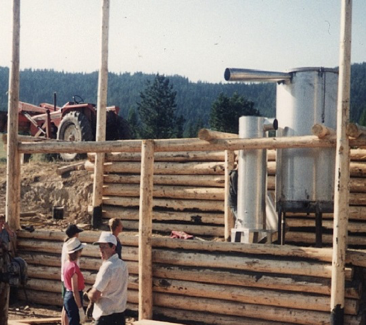 Here are some distributors from Edmonton, Alberta, Canada, in the early days, helping me harvest with our mechanical harvester, called our hands, to distill it in that tiny distillery.

Preparing the ground is critical, putting in the right enzymes, the right organic foliage feed, to nourish those plants. If you don’t build the soil, you’re not going to have good oil. And that’s what we do with our Seed to Seal that nobody else in the world does.

These were the early days of harvesting in St. Maries in 1993. The first Seed to Seal complete process of collecting the seed and propagating our crops from the seed that we grew. You can see that as I’m standing in front of the clary sage, I haven’t aged one bit.

Mary and Gary checking on the progress of the first stainless steel distillery at St. Maries, Idaho.

But yes, this is where it all began, the peppermint, the clary sage, the thyme, the lavender. And you know what? The first year that I brought lavender seeds back from France was 1986, and those seeds are the seeds that have grown all of your clary sage and lavender in St. Maries and Mona today.

This was the first vertical distillery I built in 1994, the first stainless steel distillery to ever be incorporated into distillation, perhaps in the world but certainly in North America. I built it in the garage of my old farmhouse in St. Maries and installed it here in my log wood frame structure I built, because there wasn’t money to do it with cement and steel. That came later.

Now you might notice that standing down there in the left hand corner of the picture, there’s a person standing to my left side by the boiler. That’s a woman who came to see the crazy man. She was a distributor at the time and didn’t believe a lot of the things that she was hearing.