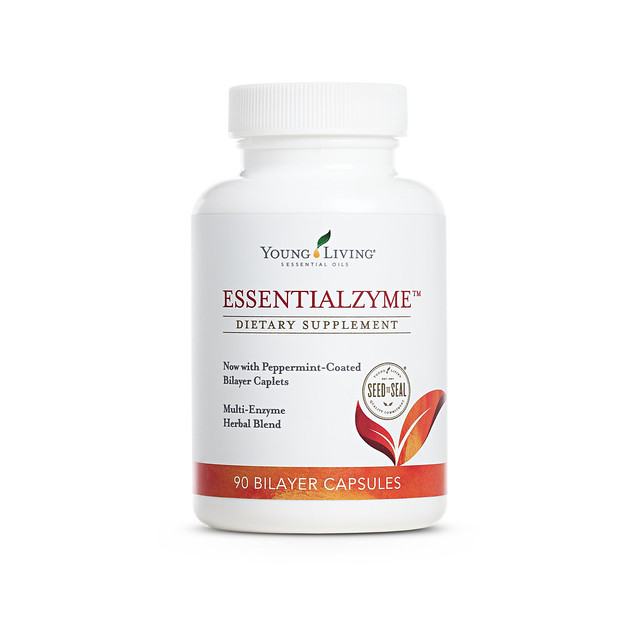 EDITOR’S NOTE: Since Gary Young’s passing, we have been taking stock of the tremendous contributions he made to the world by revisiting his presentations, such as this fascinating blog post series on enzymes and gut health, originally published in 2011. This is part three of a three-part series, the first being about the benefits of a good enzyme savings account and the second being about what enzymes do exactly.

I started the development of Essentialzyme in 1982 and finished it in 1984, and this has been the mainstay that I used in the treatment of my clients since then.

We experienced a problem [in 2009] with the laboratory that was manufacturing for us and tried to find another company that would formulate according to my specs and standards, but we had to go from a tablet to a capsule, which was not what I wanted, not because it wasn’t good but because it didn’t create the action that I put in the original formula.

I told Marc that we had to go back to what we had, and we had to find somebody who could make it the way I originally made it and the way I wanted it, so he and the other researchers worked for months, going from lab to lab, trying to find one that would manufacture it correctly.

And now we have Essentialzyme in an enhanced formula. One thing that is really important to know is that animal enzymes work in the stomach, but they will not go through to the intestines. Therefore, it is really important to have an enteric coating, or what we call a “bio layer” that has a time release in it, so it is designed to stay for one hour in the stomach and then go into the intestines and release two hours later. Essentialzyme is a very powerful product, and you’re going to really love that. Of course, it’s gone back to tablet form.

Essentialzyme is a complex of animal and plant enzymes that include pancreatin-x. Your pancreatin enzymes help regulate the function of the pancreas and your glucose and insulin needs; every aspect of it has a specific function.

I had a beautiful lady say to me that she takes 20 to 30 enzymes a day and is still having a problem. So I made a really simple analogy. I said that if you have a car with a 21-gallon tank on it and you run out of gas, you have to pull over and park. If you put 1 gallon of gas in it, how far are you going to get before you run out of gas again?

For those of you starting out, your gas tank may be empty, and putting three or four enzymes in it is like putting a gallon of gas in it. You might get down the road a little way, but you’re still going to have problems. You need to build up your enzyme reserves. It might take two years to reestablish that balance in your digestive tract, and up to two years could be a minimal time. If you have allergies, it might take you three years. If you have an illness, it might take you five years if you have depleted your enzyme reserves—particularly if you’re over the age of 40.

One of the things that you will see in Essentialzyme is carrot powder.

Why did I include carrot powder? Because I want the body to recognize the natural form of enzymes. It’s important to know that carrots contain some of the highest levels of natural plant enzymes in the entire plant kingdom.

Remember, enzymes need minerals to perform their functions. Minerals are called “cofactors” because without them, enzymes would just sit around and do nothing. So it is vital that you supply your body with a variety of minerals.

If you look on the Essentialzyme label, you will see two ingredients called alfalfa leaf and sprout powders. Alfalfa is one of the most important ingredients we have included because it has a full range of essential minerals that harmonize and complement the enzymes in the carrot powder and the other enzymes that we have put with it. These enzymes include pancreatin, pancrelipase, trypsin, bromelain, and papain; all these ingredients are great because they work together.

WHAT CAN ENZYMES DO?

Enzymes can clean up plaque and eliminate old fat and proteins left deposited for years. Enzymes enhance circulation and support the immune system by improving and increasing the surface area of the red blood cell, allowing it to transport more oxygen.

In addition, enzymes may support weight regulation when combined with a balanced diet and exercise. Whoever thought of such a thing? For instance, overweight people may be lacking in lipase.

As enzymes are broken down, some will stay in the cells, and some will pass into the bloodstream as amino acids. They become building blocks in the body. Now this is something that’s really interesting about enzymes. You never lose all of them because some of them will change structure during utilization. As they go through their activities—whether they are digesting food, preparing to expel toxic waste, or breaking down mucus in the body—they will go through the process for which they are designed, and then they will have finished their job.

At that point, they break down and turn into amino acids; some are then excreted and others go back into the bloodstream, and guess what happens? They go back to the workshop and are restructured to later become enzymes again. Isn’t that neat? So the body takes some of the enzymes, rebuilds them, and puts them back into use.

However, here’s the thing that’s really a catch-22. You need to continually supply nutrients to your body. When you have a deficiency, there aren’t enough enzymes to put the amino acids from broken-down enzymes back together to go back into your bank account. It’s a domino effect: You just keep having the negative impact of an enzyme nutritional deficiency, so learn how to feed your enzyme bank account.

It is remarkable to think of all the chemical processes that enzymes spark. For example, proteases break down long protein chains into peptides, which are then broken down into amino acids; amylases break down polysaccharides; lipases break down fats; and cellulases digest the carbohydrate bonds found in fiber. Some of these enzymes make their way back to the liver and pancreas and are used again—providing you are continuing to build your enzyme reserves.

I want the medical doctors here to know that I respect them, admire them, and love them, because they have had the courage to go against the system and show the people a better way. Thank you. Thank you for being part of Young Living and for having the courage to do what God sent you here to do.

Last Friday [in 2011], I did a meeting for 82 people in Quito, Ecuador, and in that group were four medical doctors who had all signed up to be Young Living members. It was great.

One night in Lima, Peru, I did a meeting for the members there, and we had six medical doctors in our group. In Ecuador and Peru, natural medicine is their medicine, and it’s easier for them; they’re not ostracized like here in America or Canada. It’s great that people can be open to new ideas.

ENZYMES AND OTHER IDEAS

Here is an example of a new idea: If you want to experience good health in this day and age, take bread out of your diet. It’s that simple. That’s what it takes. You have to give the body something to help it overcome the deficiency and deficit you have created over the years, and that is the best way to do it.

Should you eliminate all yeast products? You may have to. But is this the answer to your health problem? No, it is not. Dr. Crook wrote a book back in the 1980s called The Yeast Connection, telling everybody to stop eating yeast, but that’s a Band-Aid solution. Where do you get your B vitamins from? Yeast. So if you stop eating yeast, you become deficient in B vitamins.

Let me reiterate, if you have a yeast allergy, you have a gluten allergy. If you know that, then don’t hesitate to stop eating foods made with yeast, then start taking your enzymes and cleansing your body. God didn’t give you these ideas for you to put them in cold storage or to lock them up in a vault someplace and never utilize them. It’s all about finding balance in your life and in your diet.

What every person should do at night is take 10 to 15 Detoxzyme when they go to bed. If you add 1 or 2 Essentialzymes with that, then you are going to make sure that you have what you need in your digestive tract to handle that big meal you had at 8 o’clock.

I just got asked last week how I do what I do. Well, I don’t sleep a lot, because I take a lot of enzymes.