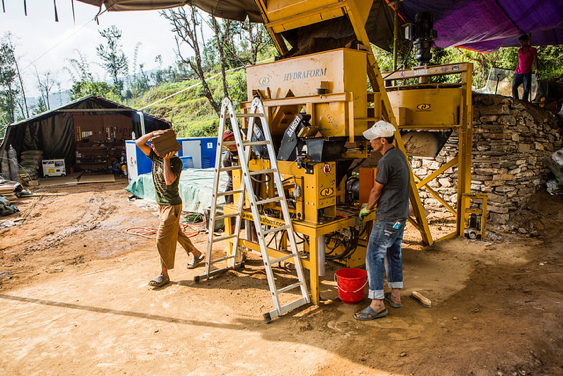 GARY: This is the brick factory and the tarp we put up, so we could work during the rain and keep everything going.

And these are the bricks.

This is the same system I have on the farm in Ecuador, except it’s a more modern version and seven years newer. This factory will turn out 750 blocks per hour when it’s in full operation. What’s beautiful about it is they’re made out of the dirt—95 percent dirt, 5 percent cement.

These blocks have a terrific bearing strength, stronger than a cinder block. So the design that I made, that we’re building their homes and school with, has a seismic quality to withstand a 12 earthquake.

For the first time in 13 months, these people truly have hope. As Nikki Davis, Young Living Foundation Executive Director, mentioned, my goal is to teach them. I’ve trained 26 of the village members to operate the brick factory, and it’s going on every day. We’re running only one shift because the rains are so bad right now. But we’ve trained them so they can build their own village. I have two people there. This is teaching the people to fish, not giving them the fish. When this village is built, then we’ll move on to the next one. There are only 600 left to go.