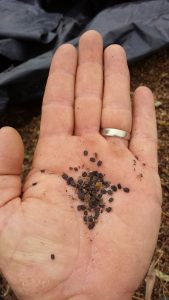 Why is Young Living the No. 1 choice for essential oils in the world? It’s because here you will find the true, highest-quality essential oils, not just marketing hype. Where do quality and purity start? Do they start with the broker? With the vendor? With the marketer? With the sales people? With the lab and chemists? What determines a genuine, pure, therapeutic-grade essential oil?

It actually starts with photosynthesis. It’s very simple. It’s the light energy from the sun that gets converted to chemical energy in the plant. That energy gets stored in carbohydrate molecules and enables it to basically turn carbon dioxide into oxygen we can breathe.

Proper attention to the photosynthesis process, cultivation, nutrients, crop rotation, and soil building are required by the plant in order to produce an essential oil that has an aroma that creates spiritual awareness and a sense of calm.

IT REALLY STARTS WITH THE SEED

But it really starts with the seed, namely the proper seed species. Seeds can be genetically modified, so in order to have the proper seed species, you’ve got to grow them yourself or work closely with the grower. And the only way to understand and know what to look for in the genetics or the species of the seed is by being a farmer yourself. You have to know the origin of your seed to make sure it’s not genetically modified.

I’ve been a rancher and farmer all my life. I grew up ranching and farming with my father. I went to Canada and homesteaded in 1967 and developed a ranch there, running cattle and horses and logging in the wintertime. It’s what I know and love. I’m passionate about getting the right seeds.

Most seeds are commercially grown in a nursery. The big seed companies have huge greenhouses where they grow the plants to cultivate and gather the seeds so that they can sell them commercially.

Can you imagine what it would cost to wildcraft in the United States and to try to gather seed from yarrow plants? Or fleabane in Utah? It’s cost-prohibitive; that’s why there are commercial companies that grow it.

But plants need the natural harshness of the environment to produce good seeds, which in turn produce good molecules of oil.

WHERE DO THE SEEDS COME FROM?

This is where I first started growing in 1988 on a little quarter-acre plot in Spokane, Washington. Where did the seeds come from? I brought the first seeds back from France in 1985, and I planted in 1987, 1988, and 1989. I just kept planting a little bit more each year and experimenting and growing.

It all started here in Spokane, Washington, on this small plot where I planted the lavender seeds I brought from France.

This was my first test plot of lavender in 1988 that we distilled in 1989. I sent the oil to Dr. Kurt Schnaubelt, who has a PhD in biochemistry. He analyzed it and sent it back to me with a note on the bottom that said, “Gary, where did you get this oil? It’s the best I’ve ever seen.”

I called him on the phone and said, “Kurt, I distilled it right here.” I was so excited I couldn’t sit still. Can you imagine me getting excited over producing 1½ milliliters of lavender oil? We produce thousands of gallons of it now, but I got excited over 1½ milliliters.

I said, “Here in Washington.”

I said, “Kurt, I grew the plants here, and I distilled them here.”

He said, “Gary, no, there’s no lavender growing in Washington.”

Well, finally he said, “Golly, I didn’t have any idea. Gary, for real, you did this?”

Well, it’s Kurt Schnaubelt’s fault that we are where we are today. If he had come back and said that my lavender was the poorest stuff he’d ever seen, I would have hung it up right there.

The first lavender seeds came from France in 1985. Then I continued bringing seeds in ’91 and ’92 that were to be planted later. These plants and seeds were planted in Mona, Utah, in 1996, and the rest is history.

That’s a picture of me in my clary sage field in 1996. Can’t you tell that I haven’t aged a bit? The original clary sage came from France and was planted, grown, and harvested on the Young Living farm in St. Maries from 1993 to 1996. I finally gave up there because the deer were my biggest competitors. They love clary sage. What’s really interesting is that after a study was done with Idaho Fish and Game, we found that when the deer eat clary sage, the does produce more twins. Unequivocally, more twins.

Today clary sage is grown at the Young Living farm in Utah; you’ll see it when you visit. When it’s going into bloom, it is magnificent. You can see German chamomile being distilled at the farm on Convention Farm Day, and you can also see juniper being distilled.

ARE THE SEEDS GENETICALLY MODIFIED?

Our melissa plants came from France in 1991. Why did I bring seed from there? Because I was able to go to the farms and get seed from the growers who were growing it in the field. It wasn’t genetically modified and it wasn’t grown and produced in a greenhouse.

Now, whenever you take a seed and transplant it from one place to another place, it has to adapt. I heard someone from another company say, “Young Living plants are not genetically strong because they’re all brought from other countries.” Well, guess what; practically every plant in the United States came from another country originally.

This is a field in 1999. I really wanted to show you a picture of Mary, but I couldn’t find it. She loves running the swather to cut melissa; it’s one of her favorite things. The other plant she loves to cut is wild tansy. She’s a fabulous swather operator. She found another niche in life next to singing.

I also send my farm crew not only to Ecuador but also to Peru, gathering seed.

So you can see that Young Living goes through a lot to pick and plant the right seeds. And that’s just part of the processes of proper cultivation, harvesting, and distilling. That’s why Young Living promises quality from “seed to seal,” so you can know how hard we work at every point to give you the highest quality essential oil in the world.