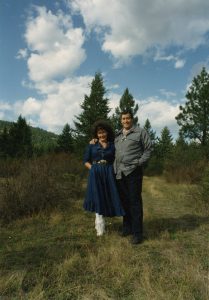 Since Gary Young’s passing, we have put a lot of thought into how to continue the D. Gary Young blog. We want to foster a stalwart commitment to Gary’s legacy, so we asked members to think of a fond memory of their time working with him on projects, on travels, at one of the farms, or in another setting to share those memories with you.

Here is another memory from Nancy S.:

Gary had me help him with an expo in Salt Lake City, and that’s where I met Mary and signed her up in Young Living. Little did I know that someday she would be my sister-in-law. What a great day that was and for Gary to have an such an awesome partner.

I remember attending my first convention, which was held in Spokane, Washington.  Only 34 people were there, including the actor Clint Walker, who was Gary’s good friend. Breaking for lunch, Gary invited us along with Clint to go with him. As we were getting in the elevator, Clint was holding the door for us all to enter. When we were all in, he looked around and said, “Boy it’s a good thing there aren’t any more guys like Wyoming and me, or no one else would fit in here.” That’s what he called my husband Blaine. We had a good laugh with Clint.

During lunch, Clint told us about some of his movies and what happened when he did them. Then he shared with us what happened when he was in Cheyenne for the Cheyenne Rodeo. He was waiting outside for the gate to open to be introduced sitting on his horse. As the gate opened, he came riding into the arena on a run, waving his hat to the crowd. Just then the lights glared on, and his horse stopped in his tracks from a dead run. Clint went flying over his horse’s head, did a compete circle in the air, and landed on his feet, bowing to the audience. He said if it had been planned that way, he could not have done it; he would have probably landed on his face. The horse had not had those light come on so fast before, and they frightened him.

I have not missed a single convention since then, and look at what they are like now! Almost 50,000 people will be attending next year!