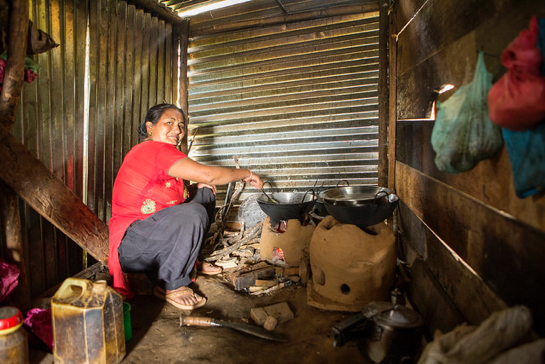 GARY: This picture shows the typical conditions inside the houses they are living in. If you look on the right side, you can see kind of a mud/clay stove, and that’s exactly what it is. That’s what they cook on and that’s what they heat with. There’s no chimney. What are the insides of the houses like, Son?

Jacob driving the Bobcat to clear earthquake rubble, so new homes can be built.

JACOB: They’re basically a ton of tin, two or three pieces of plywood, and five or six 2’x4’s.

GARY: It was pretty sad. Jacob arrived and spent the last week with me there, and it was an experience. At first, the people didn’t think that I, the owner of the foundation, would work, because that’s just something that isn’t done.

And then when my son came and they saw him working, that was another shock to them. It was so beautiful, because we just got in and became a team, didn’t we? And everybody just did what was needed. This was when Jacob arrived. There’s Jacob in the Bobcat moving debris from the collapsed homes, so we could start preparing for the foundations.