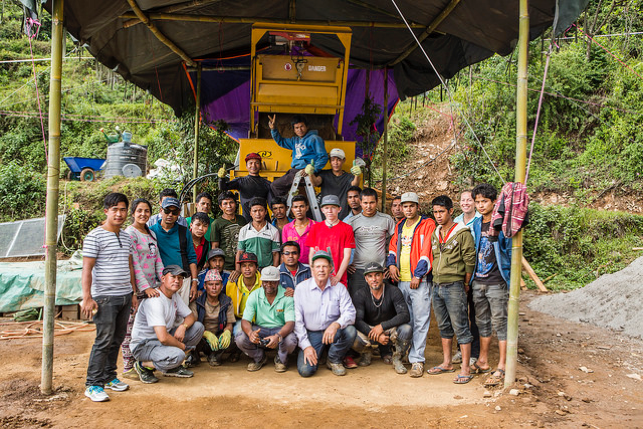 Celebrating the installation of the brick factory Gary bought for rebuilding Yarsa.

JACOB: It almost took us that long to get it out of the truck!

GARY: And the people in the village had to rebuild the 2½-mile road before we could get the semi in to offload the brick factory. It was amazing to watch them, wasn’t it?

JACOB: It was. The brick factory came on a low-bed trailer, and we didn’t have a wiring system or cable to pick it up. So the people said, “No worries, we’ll go get some old cable over there, and we’ll just put a couple of knots in it, and then you can pick it up.” So they came back with this cable, somewhat knotted up. We hooked onto brick factory and started picking it up, and we were worried that it wasn’t going to make it at all.

GARY: It was pretty scary, wasn’t it?

JACOB: It was. But you know, those people really know how to make knots! It just really made the load come right out of that truck easily; and then once we set it down, we all thought, “Whew! Okay, next thing.”