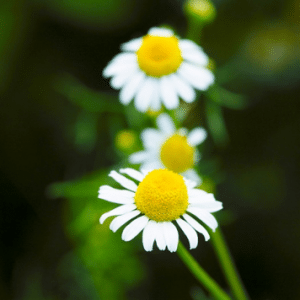 We turn again to Rosita Arvigo, the traditional healer and ethnobotanist. She is director of the Ix Chel Tropical Research Foundation and founder and co-director of Terra Nova, the world’s first and only biomedical rainforest reserve.

Chamomile is still treasured by the Mayan people.

While her book does not list the botanical name of chamomile, it is probably Roman chamomile (Chamaemelum nobile). The University of Maryland Medical Center writes this of German and Roman chamomile: “Both are used to calm frayed nerves, to treat stomach problems, to relieve muscle spasms, and to treat skin conditions and mild infections.”
Arvigo found chamomile helpful for children. For baby colic, she recommends infusing 1 teaspoon of dried chamomile in a cup of water. After straining, 1 ounce can be given to the baby every 2 hours. She also writes that not all sleeping problems are caused by colic. For her daughter’s sleeplessness when she was past the baby stage, she gave her 2 ounces of chamomile tea with excellent results.
Adults can also enjoy a relaxing chamomile tea. Arvigo recommends chamomile flowers boiled in water for skin infections and for use as a mouthwash.