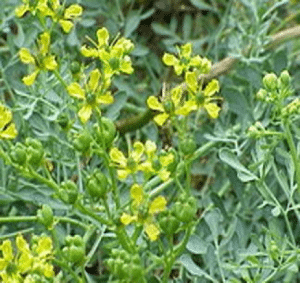 Rue (Ruta graveolens) was used by the Mayans to heal a broken heart.

The Mayans understood the power of using plants for emotional healing. Rue, however, was used by the Mayans for more than a broken heart. Descendants of the Mayan people today still use rue for anxiety, anemia, promoting menstrual bleeding, colic, and arthritis, according to the Maya Health Toolkit for Medical Providers.
In her book Rainforest Home Remedies, Rosita Arvigo explains the ways the Mayan people use rue today. She explains that “Maya healers always keep a preparation made of rue leaves and rubbing alcohol on hand to rub on the forehead and palms of a person who has fainted.” She warns to be careful not to get the rue in eyes, mouth, or nose.
The Mayan people still use rue to help heal a broken heart. Rosita Arvigo told of a young woman who came to study at the Ix Chel Farm in Belize, where Arvigo teaches. A young man had broken up with her, leaving her heartbroken. Arvigo broke off a tiny sprig of rue, had the woman place it under her tongue and swallow the juice until the sprig was dry, and then replace it with another sprig. This was to be done three times before bed. Arvigo added her prayers for healing. The next morning, the young woman was smiling and said, “I’ve decided that he did me a favor!”
The name given for “fright,” meaning shock or trauma, is susto. The Maya Toolkit for Health Providers lists a tea made from the herb rue as healing for susto. After the tea is made, the healer gathers hot coals from the four sides of the fire, representing the four cardinal points of fire, air, water, and earth. The coals are added to the tea, and when cooled enough, consumed.