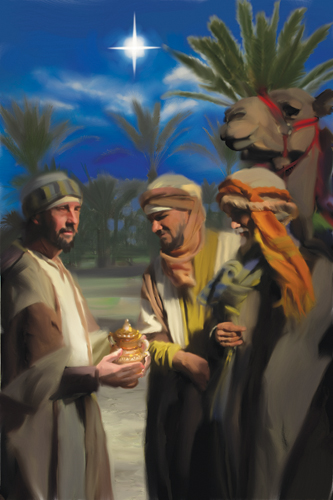 We continue with a series of excerpts from D. Gary Young’s novel The One Gift, the action-filled story of a Bedouin caravan commander named Shutran. We hear the Christmas story told by Shutran’s descendant, also named Shutran, as he meets three caravan commanders who will carry royal gifts to a Special Child.

Caspar, Melchior, and Balthazar arrive in Ein Gedi to meet Shutran as they follow a bright, shining star to Bethlehem. Illustration © YL Wisdom 2010.

The sun was still climbing in the sky when the second caravan arrived. The lead camel stopped and knelt down so that the weary traveler could step away. He said to me, “I am Melchior and have traveled for three months from the Hadhramaut, the land where God created man, ruled by King Yada’il Darih II. The gift that I bring comes from Eden, which is part of the prophecy to be fulfilled.

“I have brought the sweet myrrh of Eden that represents sacrifice and suffering. I would be most grateful if you could distill it for me so that my gift may be made ready for the mother of our new King.”

My servants had already put the myrrh in the bubbling, hot water, as it would take a few hours before the oily liquid would start to separate from the resin. My servant had just gone out when he came running back, calling to me, “Master Shutran, the caravan is in the wadi.” I felt a burst of excitement as I went out to greet the riders who were approaching. “Commander, may I ask your name?”

“I am called Balthazar and have been traveling for three months. I am from the Land of Frankincense, ruled by King Aretas, the IV, and I have come to fulfill the ancient prophecy. I bring with me the finest hojari in the entire world from out of the Zophar Mountains—frankincense, the symbol of divinity. May I trust that the oil will be distilled for the morrow? I desire to carry my gift of the holy oil to our newborn Messiah.”

That night had such a feeling of serenity, a peace as if being in the presence of God that enveloped my whole being. It was transforming and I never wanted it to go away. I took another deep breath and then turned to go back inside, when an extraordinary shimmering brightness caught my eye. My eyes searched where the three stars had been, but now they had become one—a single blinking star! Yes, this was the beginning of the third sign, a brilliance that would soon grow and fill the sky.

The One Gift novel is available at Life Science Publishing by calling 800-336-6308 or at www.lifesciencepublishers.com. Copyright © 2010 YL Wisdom.