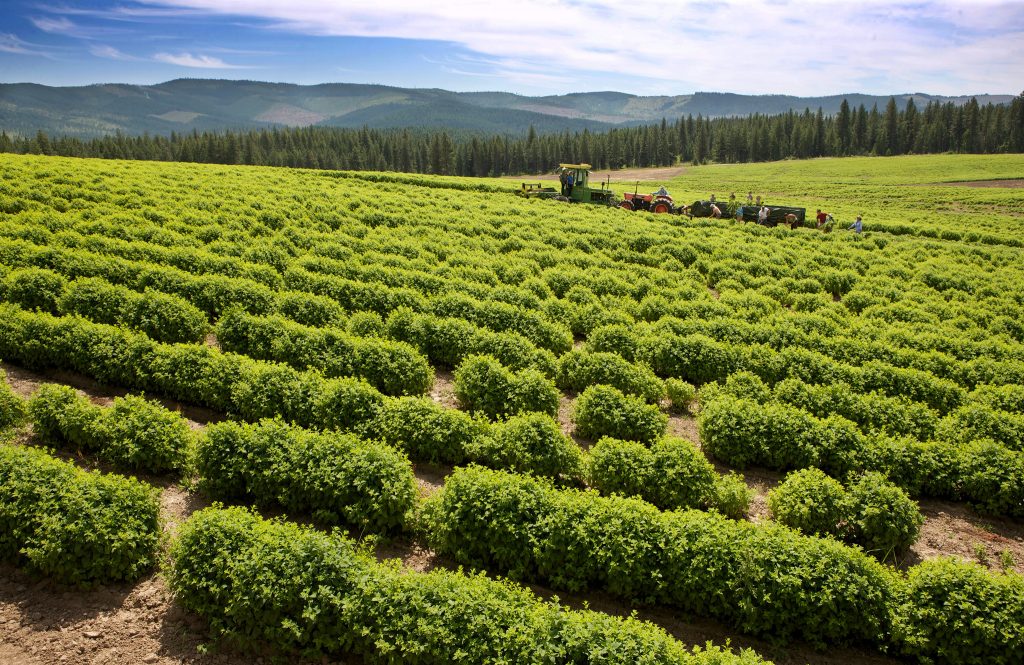 The essential oil of Melissa—more commonly known as lemon balm—has been used for over 2,000 years, starting with the Greeks and Romans, and then spread into Spain and throughout Europe. The early colonists of North America brought it with them, and it is recorded to have been among the herbs cultivated in Thomas Jefferson’s garden. This is all well and good, but it is also an oil that has played an active part in the history of Young Living.

A field of melissa botanicals ready to be harvested.

“When melissa was first planted [on our St. Maries farm] in 2000,” says Mary Young in the second edition of her book D. Gary Young, The World Leader in Essential Oils, “the oil was not abundant in the world.” That eventually changed, but then Gary discovered that melissa botanicals did not produce much oil when cut and left on the ground during harvest. So he put tarps underneath the swathing vehicle to catch the plants as they were cut. When the tarps were full, they were lifted onto a flatbed trailer and driven to the distillery.

She continues: “This was [still] very slow and labor-intensive, pushing past the best time for distilling. [So] Gary designed equipment to mechanize the harvest and started fabricating it in the shop. He and several others worked on it during the summer but didn’t finish it in time for the harvest. And Gary broke his hand while working on the harvester and had to have surgery.”

The next summer, however, the new machine was ready and went into the field; and within a week’s time, the harvest was finished, and the oil production increased greatly.

Gary persistently developed melissa, despite the challenges, because he felt it was “beautiful,” and because it was high in geranial, a constituent shown to support good health in a variety of ways. Some members, like Joanne Kan, a Royal Crown Diamond from Hong Kong, even called it “magical.” In her book Following the Leader: A Life-Changing Adventure with D. Gary Young, she tells of an experiment Gary did to show melissa’s sensitivity to energy:

So he had two female workers sit by a melissa plant and praise each other with joy and silly laughter until they couldn’t stand each other anymore. Then they tested the Brix level and found it to be relatively high, indicating high oil content in the plant material.

Then he had two male workers sit next to another melissa plant and curse and argue with each other until they were ready to fight. Then they tested the Brix level of this poor plant, and the level was very low and indicated almost no oil.

Joanne is featured in this video about Young Living’s farms and its ambitious 5×5 pledge.

Arlene Anisman, a member of Young Living for more than 20 years, discovered melissa at one of the many trainings and conventions she attended. She says she experienced the oil’s impact “on an emotional level quite intensely.”

It can be argued that Melissa essential oil wouldn’t have played such an active role in Young Living’s history if it wasn’t also effective for those who have used it to improve their lives in some way.

Try Young Living’s Melissa essential oil today and see if you can smell its history and feel its benefits.