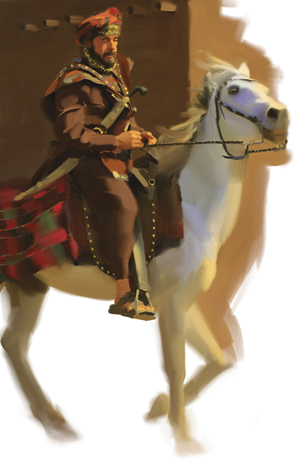 We continue with a series of excerpts from D. Gary Young’s novel The One Gift, the action-filled story of Shutran, a Bedouin caravan commander. Shutran’s descendant, named for his famous ancestor, now ponders his heritage and wonders about the original Shutran, who founded the family caravan dynasty.

After reading about the story of Shutran’s descendant who distilled biblical oils at Ein Gedi, his pondering takes us back to the beginning of The One Gift’s tale of the fearless Bedouin caravan commander named Shutran. Illustration copyright © YL Wisdom 2010.

I felt very humble as I reflected on the immense sacrifice of our great ancestors—the caravaners. Had it not been for their strength and relentless determination, we probably would not be sitting here now. They fought many battles and gave so much to make this world a better place. What they believed and taught, as uneducated caravan commanders, helped to prepare us for one of the greatest events that would affect the lives of millions of people.

I wondered what kind of man my ancestor was who started all of this. I would love to go back in time to meet Commander Shutran as he lead his caravan!

I ran my hands over my commander’s cross belt, thinking about the first time I had buckled it on and what it represented. Many years had passed since that time, but the memory of my father watching with great pride was still vivid. As the commander, the responsibility was great because so much depended upon my decisions. My father had prepared me well, and I often reflected upon the things that I had learned from him.

I had crossed the desert many times, but each time I wondered if this would be the journey when the water in the oasis would be dried up or if we would encounter desert pirates who would attack to take our precious cargo, regardless of the cost of life. With these dangers I knew that some of these men, perhaps even me, might not live to make the return trip home.

The immense challenges of the unknown always lingered in the minds of the caravaners. The fear of encountering a blinding sandstorm that could drive man and beast absolutely mad was always a possibility, and if our Bedouin scouts were to lose the trail, we might have to travel three or four days before reaching the next water hole.

I felt both the anticipation and anxiety of the men, especially those making the journey for the first time.  The excitement was contagious while the returning caravaners told stories around the campfires, romanticizing the encounters with raiders and the battles fought. But that didn’t lessen the reality for the scouts and sentries, whose responsibility to watch for bandits.

The One Gift novel is available at Life Science Publishing by calling 800-336-6308 or at www.lifesciencepublishers.com.Copyright © 2010 YL Wisdom.