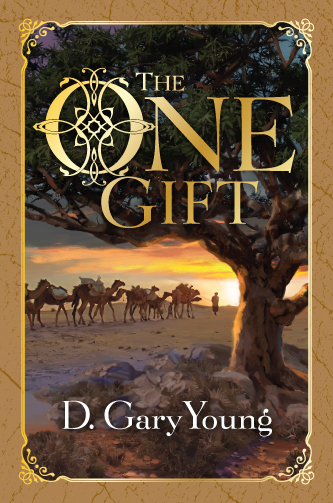 Gary’s Christmas gift to you! Today begins excerpts from his powerful novel, “The One Gift.”

Today begins a series of excerpts from D. Gary Young’s novel The One Gift. It is the action-filled story of a Bedouin caravan commander named Shutran. One reader called it “an unforgettable and informative novel that took me totally into the ancient world of the caravans and the lives and adventures of the people.” We begin with the Christmas story told by Shutran’s descendant as he meets three caravan commanders who will carry royal gifts to a Special Child.

“My name is Shutran Ali Abdulla Ismelacor. I am the overseer of the Palace of Ein Gedi, the great Treasury House, where we extract the holy oils of balsam, frankincense, and myrrh.

“Stories are still told around the campfires about a great caravan commander whose name was also Shutran Abdulla Ismelacor. It is said that he was very wise and led with powerful discernment. He was fearless and journeyed many times across the Empty Quarter. It was his caravan that carried 50 tons of incense, plus many other beautiful gifts of great value, for the Queen of Sheba to present to King Solomon in Jerusalem.

“Shutran, the great caravan commander, is my ancestor. The caravan business has been run by our family for over a thousand years. My grandfather was a commander and my father still leads the caravans today.

“I grew up in the Hadhramaut and crossed the desert many times with my father. As a family, we would go to the hills to gather the resins. We would burn frankincense resin at home to fill the air with the sacred smoke. My mother often boiled myrrh resin in water and soaked up the liquid that came to the surface with a cloth. Then she put it on her skin, which is perhaps why her skin always looked so beautiful to me. We also discovered that the oils cool the sting and ease the pain of scorpion, snake, and spider bites.

“I felt something very different with the resins and wanted to know more about the oily liquid that was within each crystal. So when I was old enough, I came here to work in the Treasury House to learn how to extract the oil from the resin. It is here that I built the extraction chamber. I have been here for many years and am now the overseer. My father named me after my 12th great-grandfather, Shutran Abdulla Ismelacor. I carry his legacy and his love for the resins.”

The One Gift novel is available at Life Science Publishing, by calling 800-336-6308 or at www.lifesciencepublishers.com.Copyright © 2010 YL Wisdom.