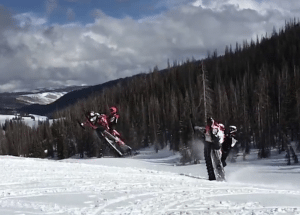 That’s Jacob. It’s all airborne! We love playing but there’s a risk in playing. But you know what, the spectators right here were taking a bigger risk. That was Mary right there in that snowmobile. She was more scared than I was.

Yes, you take risks in many ways. And maybe some of you don’t take risks quite as much as I do or in ways that I do, but I’ll be glad to share it with you and teach you how. There’s a risk in coming to Young Living’s convention, true or false? You might get addicted to Young Living.

Dr. Anthony Campolo conducted a study in which he interviewed 50 people over the age of 95, asking them, “If you could live life over again, what would you do differently?”

The three most common responses were, “I would reflect more often on my choices.” How many of you here tonight can think of how you could have made more productive choices in things that you’ve done in the past? All of us can, right? Absolutely.

The second response was, “I would do more things that would live on after I’m dead.”

Capture an idea and dream about it. You can write these things down if you would like, because this is how to become successful. Talk about your idea with family and friends. Learn everything you can.