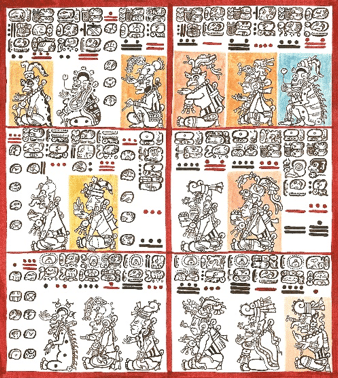 The written record of the Mayan people is called a codex. The Mayans made their version of paper from the inner bark of wild fig trees, amate (Ficus glabrata). Mayan codices were made by coating the bark surface with lime and then folding it back and forth like an accordion.
Some codices stretched for more than 20 feet. The Mayans called their bark paper by the word huun in the Mayan language.
Of the four surviving Mayan codices, three are named for the city where they are held in museums: Dresden, Madrid, and Paris. The fourth codex, called the Grolier Codex, was discovered in Mexico, where it remains to this day. The Dresden Codex is the main source of information on ancient Mayan medicine.