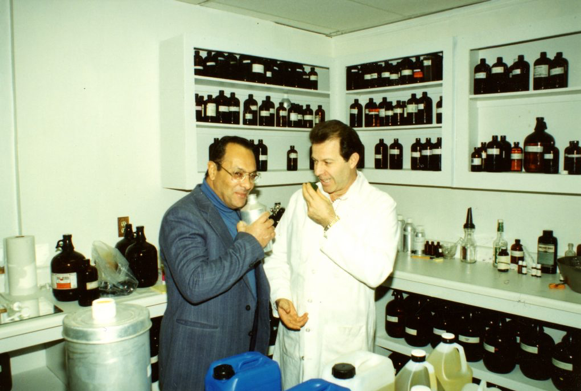 EDITOR’S NOTE: Since Gary Young’s passing, we have been taking stock of the tremendous contributions he made to the world by revisiting his presentations such as this fascinating seven-part blog post series called “The Journey to Sacred Frankincense.” Here’s Part V

I was excited to find Boswellia frereana in the marketplace in Cairo. This species was known as “The King of Frankincense” because ancient royalty desired to possess it because of its sweet perfume fragrance. However, when Dr. Farag and his students analyzed it, they found that the main compounds responsible for healing and regeneration were not present.

It was most interesting that the frankincense taken out of King Tutankhamun’s tomb resembled the frankincense species of sacra or carterii, not frereana. All the legends from ancient prophets indicate that sacra and carterii were the only species used to anoint and heal. Frereana was never used.

The frankincense from the Hadhramaut was the most desired, because the crystal-like resin drops called “hojari” come from there, which is the highest grade of frankincense known to exist. In the studies of the ancient world, it is accepted knowledge that the frankincense taken to the Christ Child came from present-day Oman—the Boswellia sacra hojari—the Sacred Frankincense. This is history! These are the facts!

It is amazing to me how people can make claims out of thin air with absolutely no knowledge or experience to back them up. People who have never traveled or conducted research pretend to be experts by copying and parroting other people’s research and literature, or they simply make up their own story.

When frereana came on the market about two years ago, distributors asked me over and over again why Young Living didn’t have frereana from Oman. My answer has always been the same. First, frereana does not come from Oman. Second, frereana is double the price of carterii because the perfume companies have a monopoly on it. Third, it is inferior in that it is not meant for healing but for perfume. To be sold for a lower price, it cannot be of a pure and natural origin, as has been verified by a gas chromatogram (GC) analysis performed by the Central Service Analytical Laboratories in Lyons, France, the number-one analytical laboratory for essential oils in the world.