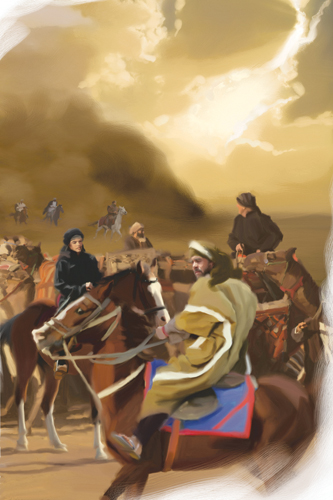 We conclude the series of excerpts from D. Gary Young’s novel The One Gift, the action-filled story of Shutran, a Bedouin caravan commander. Today we learn how Commander Shutran faces a rare danger: the deadly desert sandstorm.

Shutran sends his captains to ride the outer flanks of the caravan to guide the camel drivers toward safety. Illustration copyright © YL Wisdom 2010.

The unknown of the desert always brought new challenges. Each caravan seemed to have its own personality, but the camels always had a keen sense of the journey. As the sun climbed higher in the sky, there was uneasiness in their movement. Something was coming. We could feel it in the air. It was very likely a day in which we would face a sandstorm.

Now there were thick clouds of sand billowing on the south horizon, and I had to turn my attention to the impending storm. We needed to keep the camels moving at a fast pace in order to make it to a place behind a ridge of dunes to help break the furious wind. We pushed harder as the wind kicked the dust from under the camels’ feet. With the sand churning around us, we covered our faces with barely a slight opening in the gutrah to be able to see.

An ancient wadi was about 2½ kilometers ahead and had been covered with sand for probably hundreds of years. The north face of the dunes was very sharp and would create a natural barrier if we could make it. This would give the protection that could make a difference in our survival.

We managed to get all the camels behind the sand bluff and were still pulling packs when the storm hit. We dug in, covering ourselves as best we could with the pack rugs, blocking ourselves from the wind against the bodies of the camels. The bluffs broke the pounding force of the storm, dumping drifting sand on us a meter deep.

But finally, after what seemed like all day, the wind gradually dissipated as the storm passed. I shifted enough to move the sand so that I could stand up. Not a single camel was visible—just mounds of sand that were starting to move. It was an eerie sight. Slowly their humps began shaking and popping up out of the sand. Then heads and long necks stretched for the blue sky, and within a short time, it was completely clear as though there had never been a storm.”

This entry concludes the excerpts from Gary Young’s novel. If you enjoyed reading about the life of the caravaners who carried precious frankincense and myrrh resins to the world, The One Gift novel is available at Life Science Publishing by calling 800-336-6308 or at www.lifesciencepublishers.com. Copyright © 2010 YL Wisdom.