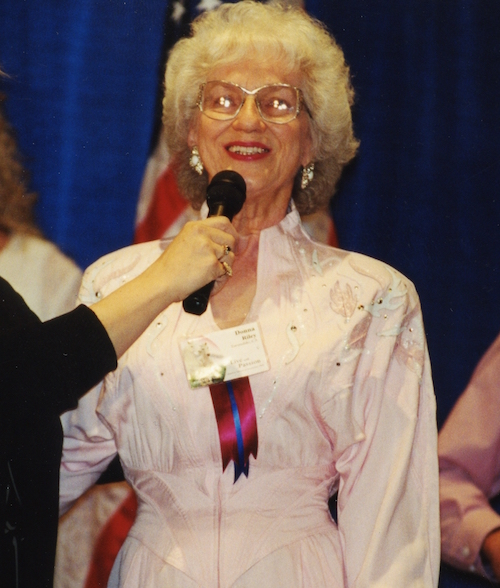 Donna Riley at the 1999 Convention in Salt Lake City, Utah.

The next thing that I’d like to share with you is the Spirit of Young Living Award. We have selected a person I have known for over 30 years, who has been a Diamond in my eye from the very beginning. This lady was diagnosed with cancer. She’d had several surgeries. She’d been through the whole gamut of the traditional medicine and was given up on when I met her. She has had a beautiful life since then, but this is a lady who tried Young Living products when they were being developed. ComforTone was made for Donna Riley. ICP, K&B, and some of the products you have today, I developed over 30 years ago for this beautiful lady.

She is one of the greatest examples in my career of a person who did the things that were suggested for her to do, and the success that she has had is absolutely fabulous. After our first few years of working together, her husband Hal (before he passed away a few years ago) worked with me in the laboratory as I was developing many of the products and mixing some of the very first blends.

And that was only part of it. We traveled together through California, Oregon, Washington, Nevada, Idaho, Montana, Wyoming, Arizona, and Utah; and she taught wherever we went. She set up and ran booths at the health shows. It was amazing. She educated so many of our early distributors back in those days about the products as well as about the oils. So she has been an ambassador of Young Living for over 30 years, which has been so exciting for me.

Help me welcome one of the greatest women I know, Donna Riley.

Gary and Donna, onstage at the 2017 Convention in Salt Lake City, Utah.