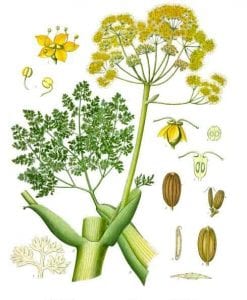 EDITOR’S NOTE: Since Gary Young’s passing, we have been taking stock of the tremendous contributions he made to the world by revisiting his presentations, such as this fascinating multipart blogpost series called The Twelve Oils of Ancient Scripture. In it, Gary examined the historical significance and traditional uses of frankincense, sandalwood, myrrh, onycha, spikenard, rose of Sharon, myrtle, hyssop, galbanum, cypress, cedarwood, and cassia. Here are Gary’s remarks on Galbanum.

Botanically known as Ferula gummosa, galbanum is mentioned in Exodus 30:34: “And the Lord said unto Moses, ‘Take unto thee sweet spices, stacte, and onycha, and galbanum; these sweet spices with pure frankincense of each shall there be a like weight.’”

Botanists have written that galbanum’s odor is strongly balsamic, pungent, and disagreeable when burned. There is an interesting suggestion in the Jewish Talmud as to why this powerful, less-than-fragrant resin was used in the holy incense: Every communal fast that does not include sinners of Israel is not a fast. This has been linked to the fact that incense included spices or perfumes with lovely fragrances but was not complete without one spice: galbanum.

With its earthy odor, galbanum is used for its cleansing and body-supporting properties. As we read the account of the anointing oil, we see that galbanum was included in the formula. This suggests that the compounding of these oils is what is really specific and where the strength really lies.

Perhaps one reason why ancient cultures esteemed galbanum may have been due to its ability to affect emotions, which is why some people today use this oil to help gather and concentrate their thoughts. This is one reason why galbanum was a primary oil in the formulation of the blend called Gathering

. It is powerful in its ability to elevate spiritual awareness and communication.

Next time join me as I discuss cypress.

[Editor’s note: because of supply issues, galbanum is no longer included in the Oils of Ancient Scripture collection. Young Living will try to bring it back, if it becomes available again.]