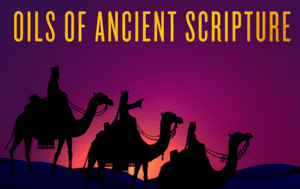 EDITOR’S NOTE: Since Gary Young’s passing, we have been taking stock of the tremendous contributions he made to the world by revisiting his presentations, such as this fascinating multipart blogpost series called The Twelve Oils of Ancient Scripture. In it, Gary examined the historical significance and traditional uses of frankincense, sandalwood, myrrh, onycha, spikenard, rose of Sharon, myrtle, hyssop, galbanum, cypress, cedarwood, and cassia. Less known about are onycha,spikenard, and rose of Sharon, but in this post, Gary Young imparted his knowledge of Onycha, one of these precious oils of ancient scripture.

Onycha was a prized aromatic mentioned in Exodus 30:22-23: “Moreover the Lord spake unto Moses, saying, Take unto thee sweet spices, stacte, and onycha, and galbanum; these sweet spices with pure frankincense: of each shall there be a like weight.”

This prized aromatic, onycha, stirred debate—whether it refers to a shellfish or a plant. The great Jewish scholar Rashi suggested that onycha is a kind of root, while the Talmud states it came from an annual plant. I believe that styrax benzoin may be the plant’s source for onycha. Like frankincense and myrrh, benzoin is a resin.

Onycha was traditionally known for its comforting and soothing properties as well as for its benefits for the skin. Ancient people used it to improve complexion and to help nourish the skin. Perhaps some of the beneficial aspects of benzoin were due to not only the oil itself but also to the other oils compounded with it.

Next time join me as I discuss another of the lesser-known oils of ancient scripture: spikenard.