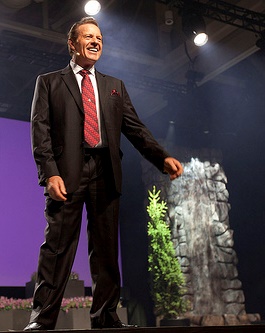 Gary sends his very best wishes from Dallas, Texas, and hopes you will join him at next year’s convention in Salt Lake City, Utah.

Greetings from Texas! We are here at our sold-out, double Grand Convention ready to Light the Fire again! Our first session just concluded and the second session begins tomorrow. Repeating for this second round, I will be speaking and joining me are two outstanding keynote speakers.

Kyle Maynard is a motivational speaker, author, entrepreneur, and athlete. Refusing to give in to his physical limitations, he became the first man to crawl unassisted to the summit of Mount Kilimanjaro, Africa’s highest peak.

We will also be hearing from Jon Acuff, the New York Times best-selling author of five books and leading proponent of social media. Jon is a believer in giving back and recently inspired his followers to assist in building two kindergartens in Vietnam.

Young Living members at the Grand Convention will join me in a run/walk through a neon-lit wonderland as we raise funds for the D. Gary Young Foundation, offering educational opportunities and health assistance in needy communities throughout the world.

For those not able to join us in Texas, convention updates can be found here:

The official Convention hashtags are: #YLConvention and #LiveInfused (for the Live Infused Campaign).

Mary and I wish you could be here with us! Keep the home fires burning and I will back with my 20th Anniversary blog next week.